After the European Parliament’s Home Affairs Committee (LIBE) agreed to a new EU regulation to prevent the dissemination of terrorist content online (TERREG) by 52:14 votes last week, the regulation has now been  deemed approved by the plenary without a vote. The regulation will allow national authorities to have Internet content removed, even if hosted in another Member State, within one hour, without requiring a court order. The proposal has been criticized by numerous NGOs as well as UN Special Rapporteurs, the European Union Agency for Fundamental Rights (FRA) and the International Commission of Jurists (ICJ).

“In the negotiations we have achieved important partial successes: Preventing an obligation on platforms to use error-prone upload filters, explicitly protecting journalism, art and science as well as introducing an exception for small and non-commercial operators from the 1-hour deletion deadline. Still the unprecedented ultra-fast cross-border removal orders without judicial review threaten freedom of expression and freedom of the press online. Anti-terrorism legislation is again and again being abused for entirely different purposes such as to crack down on Spanish separatists and artists, French protesters or refugees in Hungary.

In line with the court ruling on the unconstitutional French AVIA law, this far-reaching EU anti-terror internet regulation disproportionately restricts the fundamental right to freedom of expression and will quite possibly be annulled by the courts. Nothing is more ineffective to tackle  terrorism than repealed legislation.

Overall, this regulation is unlikely to prevent terrorist attacks. To prevent terrorist radicalisation and recruitment, it would make more sense to address legitimate grievances such as discrimination against Muslims and human rights violations, and to provide stable funding for civil society work against hate ideology and Islamism, as well as de-radicalisation and exit programmes. Finally, vigorously prosecuting terrorism and messages inciting terrorist actions is of essence. Too often, terrorists have been known to the police for a long time, but their tracks have not been followed up. Yet the new terrorist content online regulation fails to oblige platforms to report criminal terrorist speech to the police, because governments consider systematic prosecution is too much work. This is scandalous.”

“The possibility to delete content by a competent authority of any Member State is a major blow to fundamental rights. With this mechanism, Viktor Orbán could delete legitimate content in the Czech Republic or Germany. For instance, legitimate criticism of the Hungarian government could be deleted across Europe by marking such criticism as terrorism.”

The adoption of the regulation will be announced after a debate in the plenary session of the European Parliament tomorrow evening, where Marcel Kolaja will speak on behalf of the Greens/EFA group.

More information on the negotiations 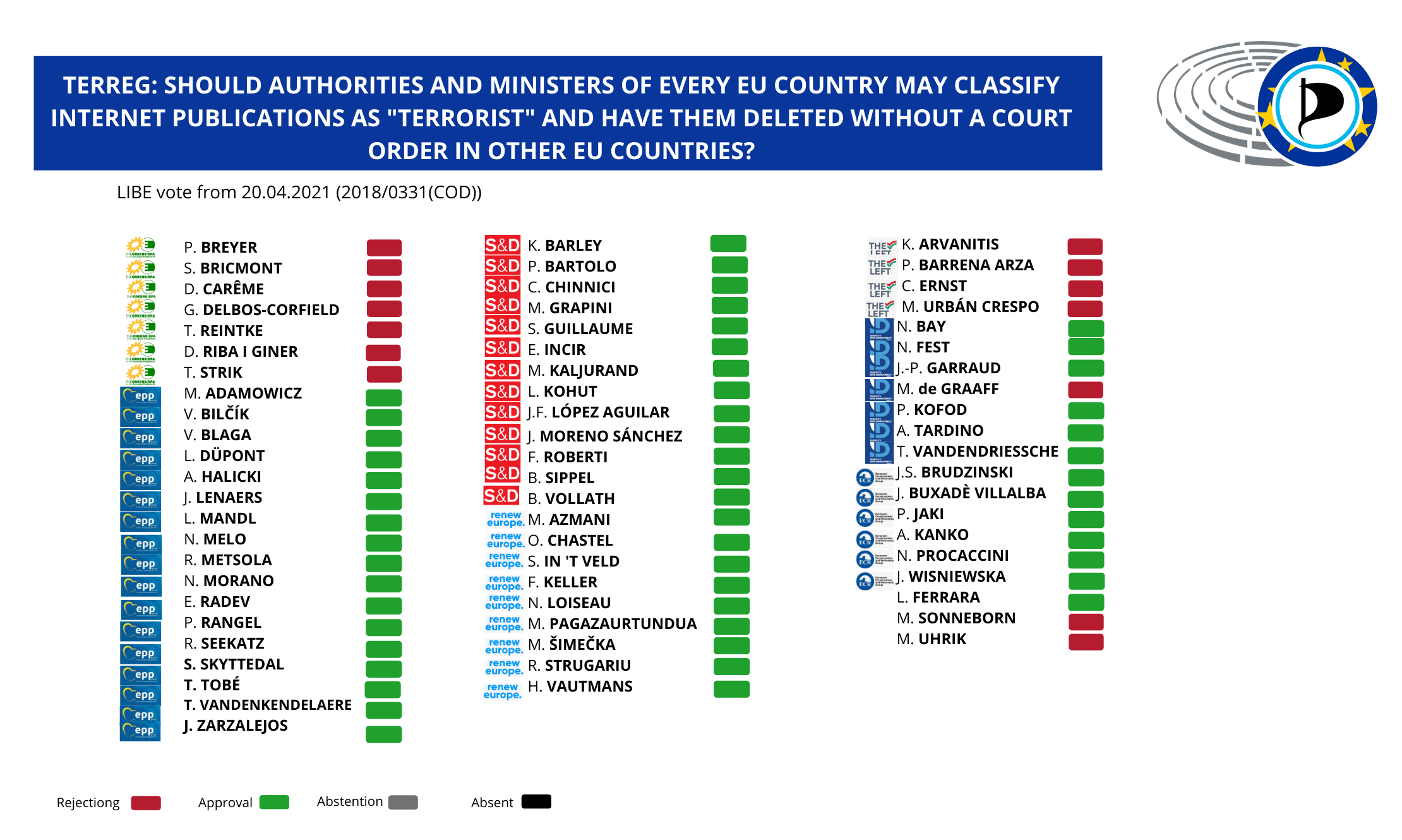