The EU Commission wants all private electronic communications to be screened for possible child pornography, in the absence of any suspicion. This week it intends to present draft legislation that would allow messenging and e-mail service providers to set aside communications secrecy and rules on end-to-end encryption. Member of the European Parliament Patrick Breyer (Pirate party) comments:

Cens-Ursula von der Leyen is attacking security and privacy on the net, instead of focusing on the real failures in protecting children, for example in the areas of insufficient prevention of child abuse, insufficient funding of therapy services or overburdened prosecutors. To allow corporations like Facebook to intercept and screen the content of all our private communications without any suspicion and across the board is absolutely ineffective for investigating the channels used by organized crime, but it does threaten the privacy and security of Internet communications of millions of innocent citizens and is unlikely to withstand judicial challenges. Imagine that the postal service would open all letters in search of forbidden content. We will not accept that Cens-Ursula sets up digital black cabinets!

Contradiction to confidentiality of online communications

The Commission’s plans are in conflict with an important change in legislation to protect online communications, which is expected to come into force with the European Code for Electronic Communications at the end of the year. The Code aims to protect the confidentiality of messages via messenger services, e-mail and Internet telephony, and to extend telecommunications secrecy to these “over the top” services. End-to-end encryption to protect against spying is to become mandatory. The changes intended by the Commission will remove this confidentiality and create backdoors. Breyer comments: ‘Suspicion-less mass screening of private messages violates the fundamental right to respect our privacy and our correspondence. Protecting our communications infrastructure from criminals and foreign intelligence services makes effective end-to-end encryption indispensable.’

Breyer considers the surveillance of commercial communications services to be ineffective in the fight against criminal content on the net, since organized crime resorts to other communication channels that elude filtering. ‘The suppression of criminal communications from open channels even threatens to make prosecution more difficult,’ warns the MEP. ‘Those who want to improve criminal prosecution must finally tackle the alarming backlog in the evaluation of confiscated data. Instead of turning foreign corporations into private police forces, law enforcement must finally enter the digital age in all EU Member States.’ In the past, investigations on false suspicion of child pornography possession have repeatedly resulted in suicides.

According to a working paper leaked today, algorithms are also to detect and report the possible initiation of sexual contacts (cybergrooming) in private messages. Breyer comments: ‘The use of such error-prone and opaque AI text filters will result in countless cases of false suspicion and thousands of private messages being read by international corporations. Cens-Ursula is wrong thinking she can simply ignore the mass protests against upload filter censorship machines last year.’

Effective action in fighting child abuse should be the top priority

It is estimated that 10% of all children become victims of sexual abuse in the course of their lives, mostly within the circle of family, friends and caregivers. Fortunately, the numbers are declining. In order to take effective action against child abuse, effective prevention should become the focus of attention. 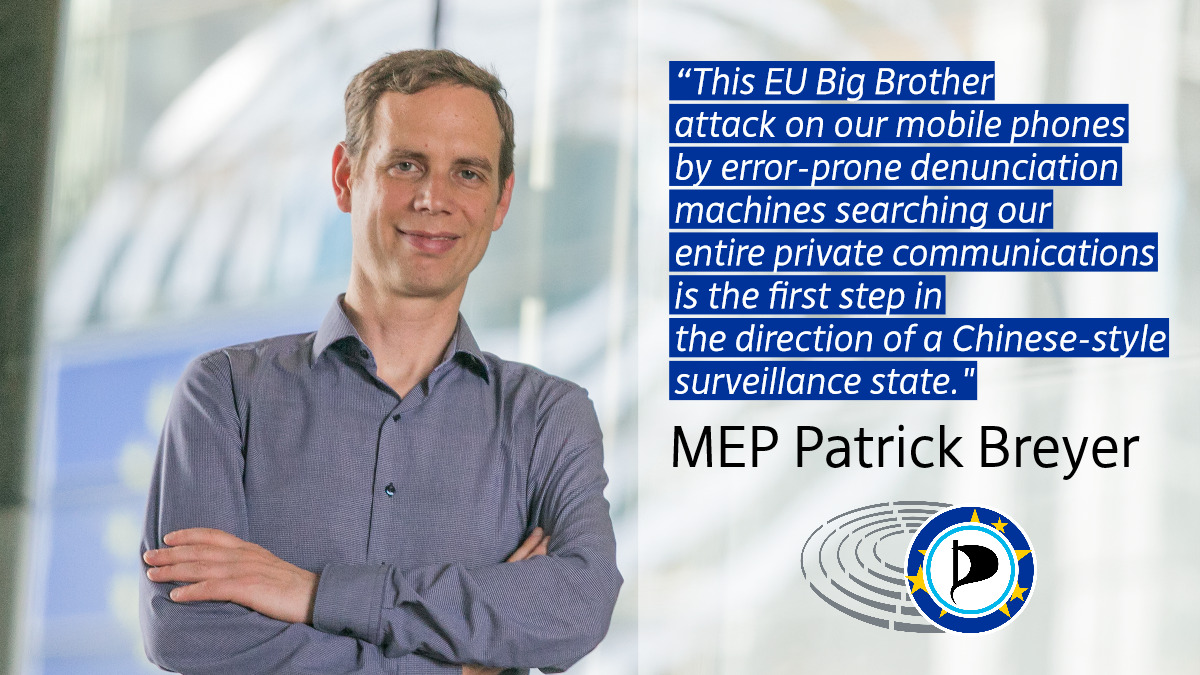