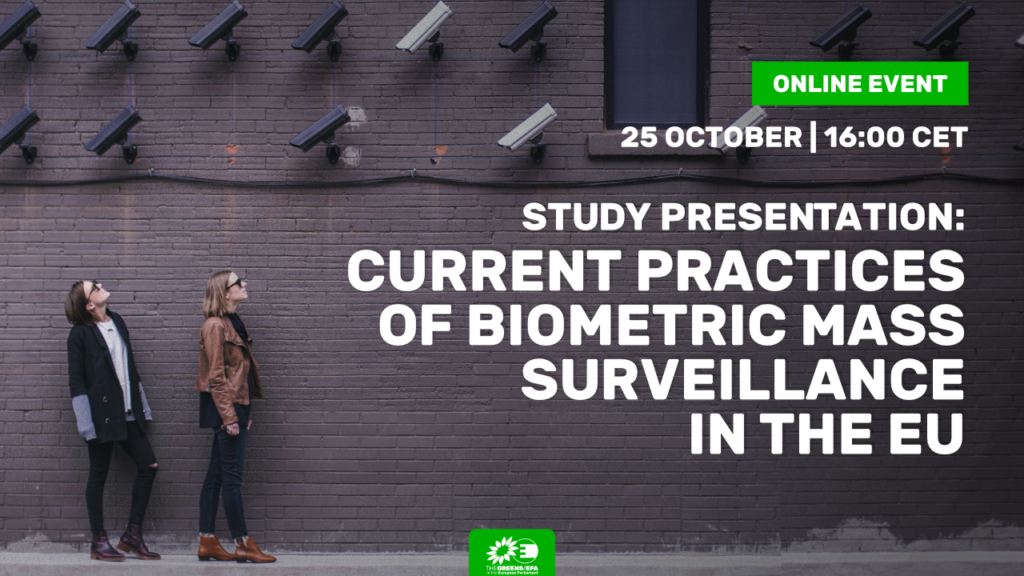 On 25 October, the Greens/EFA group will publish its report on the current practices of biometric mass surveillance in the EU. The report sheds a light on how these privacy-infringing practices have already been put into use in cities, and even entire countries in the European Union, and provides recommendations on the regulation of biometric and behavioural recognition technologies

MEPs Patrick Breyer and Saskia Bricmont invite you to join them for a virtual event on the 25 October from 16:00 to 17:00 CET for a presentation of the study and the interactive map on current practices of biometric mass surveillance in the European Union. After the presentation of the studies’ main findings and recommendations, we will present two of the case studies of the use of biometric mass surveillance technologies in the EU: the Zaventem Airport experiment as well as the biometric surveillance tests at Berlin Südkreuz train station. The presentations will be followed by a Q&A session with the audience.

We are happy to welcome the following speakers to the event

Francesco Ragazzi: Dr. Francesco Ragazzi is associate professor in International Relations at Leiden University (Netherlands) and associated scholar at the Centre d’Etude sur les Conflicts, Liberté et Sécurité (France). He holds a PhD from Northwestern University and Science Po Paris. His research interests include diaspora politics, counter-radicalisation, counter-terrorism, surveillance and more recently algorithmic politics. His current research project, funded by an ERC consolidator grant, explores the security uses of computer vision in areas such as biometric surveillance, social media content moderation or border control. His work has been published in peer-reviewed journals such as International Political Sociology, Security Dialogue, Political Geography, Journal of International Relations and Development, Journal of Ethnic and Migration Studies and Cultures & Conflicts and has featured in various edited volumes. He serves on the editorial board of the journals International Political Sociology, Citizenship Studies and Cultures & Conflicts.

Jérémy Grosman: Jérémy Grosman is a researcher in ethics of technology at the Research Centre in Information, Law and Society (CRIDS) of the University of Namur (Unamur). Jérémy had the opportunity, along the last years in the context of European and Belgian research projects, to collaborate with engineers developing automated image analysis technologies so as to document some of their social and ethical bearings.

Charlotte from “Digitale Freiheit”: Charlotte will represent the German organisation “Digitale Freiheit”. Digitale Freiheit is an Initiative for data protection and informational self-determination. With political actions and parties, they bring the issue of mass surveillance critically into the public eye. Between 2017 and 2019, the initiative mobilised protests and raised awareness against the experimental use of facial recognition technology at the railway station Berlin Südkreuz.

MEP Saskia Bricmont (Greens/EFA): Saskia Bricmont has been a Member of the European Parliament in the Green/EFA group since May 2019. In the European Parliament, she sits in the Committee on Civil Liberties, Justice and Home Affairs (LIBE). She works mainly on issues related to migration, judicial and police cooperation and the defense of fundamental rights, especially in the so-called digital world. She defends a project of open, altruistic and tolerant society, respectful of rights and freedoms. She is involved in the campaign against mass surveillance and the banning of facial recognition in Europe. Saskia also sits in the International Trade Committee.

MEP Patrick Breyer (Greens/EFA): Patrick Breyer is a jurist and Member of the European Parliament with the European Pirates, members of the Greens/European Free Alliance Group. As a member of the Committee for Civil Liberties and Home Affairs and of the Legal Committee, his political work concentrates on safeguarding fundamental rights in the digital age, particularly with regard to privacy, citizen participation and democracy. He is a long-term activist in the civil liberties movement for consumer and citizen rights, especially as regards privacy, citizen participation and democracy.

Join us to learn more about these practices, to what extent they are effective and the risks that they pose to fundamental rights!

Biometric surveillance technologies have the potential to fundamentally change our societies by fuelling pervasive mass surveillance and discrimination. At the same time, more and more people are standing up against the deployment of these technologies. In the United States, lawmakers have already started to impose bans on the use of some of the most invasive forms of algorithmic decision-making software: namely facial recognition technologies.