In a lawsuit brought by a German Pirate Party politician the European Court of Justice today ruled that open WiFi networks in Europe should be closed to stop copyright infringements. In case of abuse of a public WiFi network for file sharing the operator can be ordered to password-protect its network and disclose the password to identified users only, the Court ruled (Case C-484/14, McFadden vs. Sony Music). Patrick Breyer, the Pirate Party’s data protection expert, is appalled by this decision:
“This jurisprudence is backward and a technophobic bowing before the content industry. Following its logic using public telephone booths and letterboxes should require identification, too. The legislator needs to fix this assault on on-line privacy and freedom of information.
Contrary to the Court’s assumption compulsory identification will not dissuade users from file sharing. It is impossible to trace back a copyright infringement to a specific WiFi user even if they use a password. The Court is ignorant of the devastating consequences of this judgement for Europe’s information infrastructure.
Rights holders are sufficiently protected by mechanisms to have copyrighted content taken down. Instead of prohibiting open password-free WiFi the EU should legalise file sharing and compensate copyright holders. The Pirate Party fights for a free and anonymous exchange of ideas and information via the Internet. Today’s ruling is a complete disaster.”
The Pirate Party promotes open and anonymous WiFi hotspots in order to facilitate the free exchange of information and knowledge. McFadden: “The free exchange of information via the Internet cannotbe regarded a source of danger in a democracy but should be recognised a prerequisite to a democratic state. To us Pirates unrestricted access to the Internet and to information is a human right in the 21st century.”
A broad coalition of industry players warned the Court of Justice about the “grave consequences” of requiring open WiFi networks to be closed due to copyright enforcement. EFF, OpenRightsGroup, Mozilla and others point out that open networks aid emergency services and disaster robustness while enhancing innovation. “Don’t Make Us Lock Down Our Networks”, said EFF.
https://www.eff.org/files/2015/07/20/closedwifiasanobstacletolegitimatetrade-4.pdf
https://www.eff.org/de/node/86119 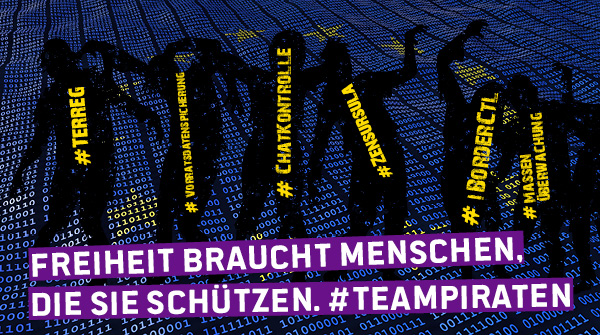